Urbanisation and Urban Systems in Europe until ca. 1800

Urbanisering og bysystemer i Europa indtil ca. 1800 (Urbanization and Urban Systems in Europe until ca. 1800) explores the Nordic urban development between the Viking Ages and industrialization from a European perspective.

Before the industrialization in the 1700s and 1800s, the vast majority of cities in Europe had less than 5.000 inhabitants, and in almost all states more than ¾ of the population lived in the countryside. But the cities were political and administrative centers and junctions for the exchange of goods and culture. Despite their modest population, the cities played a significantly greater role than one might think.

Trade with the hinterland was the most important role for a very large part of the cities, but many places also had a particular function e.g. harbour, mining or fortress.

The book summarizes a large number of research results from the last 30-40 years and can therefore be regarded as a general introduction to recent urban history in Europe. 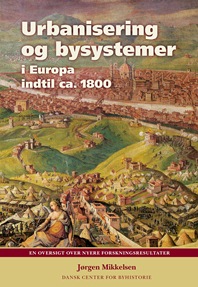