Publications Writings on Danish Urban History The Invention of Suburbia

The Invention of Suburbia

Who Invented Suburbia? is the first nationwide description of the history of suburban neighbourhoods and its residents from 1900-1960, which are found in all Danish cities.

The book is based on 30 years for work on Danish urban history and field work in 25 Danish towns from Hjørring and Esbjerg in the west to Elsinore (Helsingør) and Nykøbing F. in the east.

Who Invented Suburbia? explores urban planning, buildings and houses in the suburbs of Denmark. The book answers questions such as:

”Peter Dragsbo provides an impressive and exemplary overview of the urban planning reality in Denmark...”

”The great strength of the book is its academic weight, overview and hundreds of stories, which provide every reader with inspiration for modern tourism."

”The history of the modernized suburban Dane is actually interesting..." 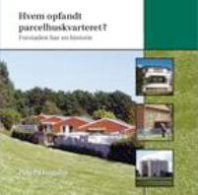