The Town of Dragør in the 18th century

Edited by Lis Thavlov with assistance of Søren Bitsch Christensen

This book concentrates on the town of Dragør in the 18th century - a century where a cluster of small houses at Amager evolved into a large and thriving seaport.

At the beginning of the 18th century, the population consisted of 135 families, who were a mix of local people from Dragør, Skåne and the nearby Dutch town of St. Magleby. The book explores how the Great Nordic War (1700-1721) influenced the population with commands for naval service, seizure of vessels and the ravaging plague in 1711 and sheds light on the following growth in shipping and the extensive work on the expansion of the harbour.

In addition the book concentrates on the disputes with state authorities to get rid of various duties such as stacking hay in the royal stables and performing road works far from Dragør and the inconsistencies with Copenhagen Weavers' Guild and Copenhagen Skippers' Guild, which both feared the growing competition from the population of Dragør.

Written by Birte Hjorth. Edited by Lis Thavlov with the assistance of Søren Bitsch Christensen 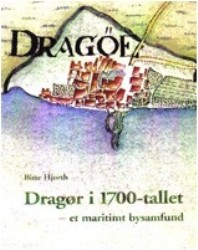