Publications Writings on Danish Urban History The History of Ribe 2

The History of Ribe 2

Ribe is the oldest town of Denmark and in 2010 it celebrated its 1300th anniversary. Among other things the anniversary was marked with the release of a book in three volumes which explores the history of the town.

The second volume explores the grandeur and fall of Ribe. The town left the Middle Ages as one of the largest, richest and most important towns in the kingdom of Denmark, but it radically descended in the 17th century and the economic situation did not improve during 1700s.

The Reformation was one of the significant events of the period - the transition from Catholicism to Lutheranism led to demolition of churches and monasteries, but did not affect Ribe as the economic center of Jutland: oxen, fish and other goods were still handled by the merchants of the town. They earned money and built some of the beautiful town houses, which characterize the streets today.

The failed wars of King Christian IV and his successors led to the collapse of trade and agriculture and invading foreign troops brought great destruction to the town. In addition plague, fires and storm surges, which at a regular basis flooded the town and tore buildings, plants and living creatures down, caused havoc.

However, the inhabitants of Ribe hardly experienced the period as a crisis, and developments in other areas - especially the cultural one - did not suffer. Although the Reformation brought great changes in the ecclesiastical field, the cathedral town of Ribe managed to maintain its position as a religious center, not only for the surrounding area and the region, but also throughout Denmark. H. A. Brorsen and Ambrosius Stub contributed to keeping the cultural banner high, when the economy was worst.

"The 330 years, which the second volume of The History of Ribe deals with, comes alive. The city is provided with voices and faces. You've been there." (Historie-Online.dk) 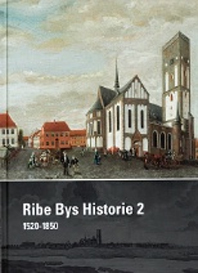