Publications Writings on Danish Urban History Metamorphosis of the Town

Metamorphosis of the Town

At the beginning of the 19th century, Aarhus was a small commercial town inhabited by approximately 4.000 inhabitans and its market squares as the economic and social center of the town. By the end of the century, the population had grown to more than 50.000, the town had spread beyond its medieval borders, and parts of the surrounding rural districts and villages had been incorporated into the market town. New neighbourhoods were establihed and although many small enterprises continued to exist, large-scale commerce and industry became dominant. The development of Aarhus thus reflected the changes in the Danish towns in general.

The book consists of a number of studies which aim at a new understanding of the emergence of the modern city. New approaches and methods are used to understand the change of the spatial structures in the city. By using digital maps based on sources, the book shows how electronic visualization exposes changing patterns of habitation, business and immigration.

Købstadens metamorfose (Metamorphosis of the Town) 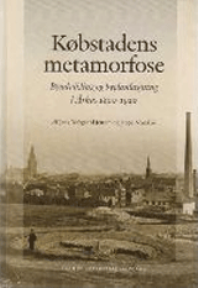